Story and photos by Dan Bacon

It was a beautiful Fall day the first time that I saw my new wolf, Midnight. He was playing in a small enclosure with his three sisters, Willow, Cheyenne and Lakota. They were the most beautiful Timber wolves I'd ever seen, and they would be part of my family for many years to come.

My wife Pam and I had decided to offer others the opportunity to see wolves up close; to watch them interact with each other in the most natural environment we could create for them. We had purchased thirty-six acres at the heart of the Roosevelt National Forest in Red Feather Lakes, Colorado, in 1994. Our land was in a small sheltered valley among beautiful rock outcroppings and Ponderosa Pines. We had fenced in ten acres, so that the wolves would have tons of space to roam.

Transporting our new babies home from South Dakota, where we had purchased them from Bear Country USA, was a real thrill. Midnight decided that he'd rather sit up front instead of in the doghouse in the back of the truck. My buddy Skip and I had to band the pen together with wide belts in order to prevent him from taking the roof right off. 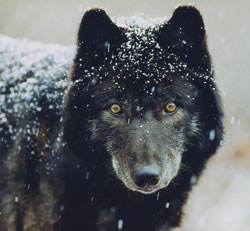 From day one we knew we had a true alpha wolf, and, for the next fifteen years, Midnight would prove us correct. Midnight was jet black, as one in ten Timber wolves can be. Always alert and eager, he was boss, and, although he never hurt them, he didn't let his sisters forget it. Midnight was quick, and he could run like the wind. He was a large wolf at adulthood, a little over one hundred pounds, and he was very strong. I watched him pick up a deer that weighed more than him in his jaws and carry it into the compound for dinner with the pack. His jaws were unreal; he could chew up and consume a two-foot long, 4-inch thick elk hindquarters bone in one hour. Although he could have, he never showed aggression toward me. I respected him and he accepted me as a friend.

One day the pen was left open, and Midnight and his sisters ran off into the Colorado mountains. The three females were back for dinner, but Midnight took a two-day jaunt before returning. He'd been spotted as far as eleven miles away.

Things didn't work out in Colorado, due to some hidden covenants in our land title. We had seventeen wolves and no place to go. We needed to make enough money to provide their food and medical needs, and without the ability to show them to the public, we would have to give them up. After hanging on for four years, 1998 brought us back home to New Jersey, where Lenny Rue, an old and dear friend, introduced us to the Taylor family. They offered to host Lakota Wolf Preserve at their campground in Knowlton Township. With our partner, Jim Stein, and lots of help, we constructed a ten-acre enclosure in the Kittatinny forest and brought wolves to the Delaware Water Gap for the first time in over a century.

Midnight fit right in at our new location, and with his mate Misty, soon became the love of thousands of visitors and friends. Kids especially loved him; it was easy to remember the "big, black one" who greeted them at the corner next to the entrance at the Preserve. And Midnight earned his keep. From the beginning, he was the most popular choice for wolf sponsorship, a principal way of funding the Preserve. For photographers, Midnight was a brilliant subject.

As Midnight and Misty grew, we hoped they might someday have puppies, and we were elated when Misty got pregnant. Tragically though, Misty lost the pup, and its death created a systemic poison that took her life. Midnight was devastated. Wolves mate for life; he'd lost his wife, his true love and best friend all at once. He just lay around, not getting up to greet anyone and coming only to eat. Since Midnight was an alpha male, it was impossible to place him with another pack, so we got permission from the Knowlton town board to get three more pups to keep Midnight company. Pam and I drove to South Dakota where we bought three timber pups. Becky Mace, who had become indispensable in taking care of our wolves, flew out to meet us, and the six of us drove back, while Jim did all the work and made preparations back home.

We kept the pups separate from Midnight for a month while they got their shots and bonded with us humans, a process that we have used with all of our wolves so that we can earn their trust. When we finally let them meet their new dad, it was beautiful. They took to him like ducks take to water, and it was just what he needed. Life would never be dull again.

The new pack -- Midnight, Black Star, Teako, and Night Song -- lived together and greeted visitors for five years, a long stretch in terms of a wolf's life. (They live 8-9 years in the wild.) Midnight developed a cataract in his left eye that began to swell. The vet was hesitant to operate, as our wolf was up in years and might not be able to handle the procedure. It continued to swell, but when we had finally decided to try the operation, he got into a tussle with Night Song over a biscuit, and the eye was lacerated. Lo and behold, the swelling diminished and, although he couldn't see out of it, his eye never bothered him again. Nature works wonders.

When a final confrontation came with Black Star, the self-appointed alpha of the three pups, Midnight was no longer a match. It wasn't much of a fight, and Midnight lay near death with a torn out throat. But Jim, Becky and our vet were able to save him, and we brought him home to a new enclosure with another lone female, Princess Jo Jo. She became his friend. Scar tissue from his surgery blocked Midnight's trachea, and he needed another serious operation to save his life. We were blessed again, and he survived.

We had purchased three new Arctic pups in June of 2008 to give King and Stormy, our two older Arctics, some company. But when they showed aggression toward the pups, we made a big decision and gave the pups to Midnight and Princess Jo Jo to raise. Midnight was once again an adopted father, and he loved it. Though approaching fifteen ears of age, close to a world-record for a wolf, Midnight showed a gentle way with the new pups, and they truly loved to be with him. He showed special kindness toward Tala, the shyest of the youngsters. Once when Jim gave them a whole road-kill deer for dinner, Midnight took it and, until he ate, wouldn't let anyone near it. But, when Tala crawled in submissively and put her paws on his head, he let her eat.

This spring (2009), it took Midnight longer and longer to get up and come to the fence to greet wolf watchers or pose for photographers, who continued to be fascinated by the big black wolf with the now almost-white muzzle. Becky gave him his rheumatism medicine every day and, although it helped, we could see he was wearing down. Our black wolves seem to be more susceptible to fly bites on the ears, and Midnight had them so bad this spring that it looked like pieces had been chewed off. In an effort help him we bought 15,000 "predator" insects that eat fly larva. They arrived a day late. Midnight passed away on May 22. He just went to sleep and left us to join his wife Misty, his sisters Willow and Cheyenne, and many others we have known and loved. Pam, Jim, Becky and I will especially miss him.

Of our original group of wolves, only Lakota is left. One more year and she will have lived longer than any other wolf known to man. We hope she makes it.

This story was first published: Summer, 2009