When approaching a big birthday, it never hurts to discover buried treasure in your own backyard. Better yet, your basement. That’s where the Morris County Historical Society recently unpacked an artistic gem hiding in plain sight — a stained-glass window crafted by the New York studio that once rivaled Louis Comfort Tiffany’s.

To call it the Mona Lisa of Morris County would be a stretch. Still, the nearly century-old window promises to play a superstar role at the Society’s headquarters, Acorn Hall, the house museum known for its Victorian era architecture and interiors.

Stored for decades in a basement crate and unwrapped in the summer of 2020, the window emerges from restoration this summer (2021) just in time to cap off the seventy-fifth anniversary of the Society’s incorporation.

“It is a phenomenal, phenomenal piece of American art history,” says Amy Curry, the Society’s executive director. She recalls jaws dropping when she and glass historian Patricia C. Pongracz, Executive Director of nearby Macculloch Hall, opened the crate. For all they knew the window could have been in chards. Instead, packed with care, it remained intact and radiant.

“When we got it on the light table,” says Curry, “I literally couldn’t breathe.” The window, which portrays St. Cecilia, Christian patron saint of music, and memorializes a musical young woman who grew up in Acorn Hall, returns from the restorer in time for an October 7th unveiling.

Viewed from a drone, Acorn Hall stands as one point in a constellation of prominent historic properties zigzagging around Morristown near the intersection of Routes 80 and 287. In the scheme of things, it could be counted as the least imposing of its counterparts— major mansions with huge properties occupied by families like the Frelinghuysens— emblems of deep wealth and “old money.” Not to mention George Washington’s headquarters, the Ford Mansion.

But to say that Acorn, a towering Italianate Victorian, offers a glimpse of the common man would be going too far. While its exterior and interiors may speak of somewhat humbler lives than those led in neighboring mansions, there was plenty of room for household servants and a coachman. Since becoming a house museum in 1973, it has offered visitors an immersion in Victorian decorative arts and a glimpse of the domestic life of its well-off Morristown owners, Augustus and Mary Crane.

Enter the window. Like many compelling stories, the window’s starts with grief. In 1876, the Cranes lost their daughter, Mary Crane Hones, to typhoid fever. Only twenty-seven, she left behind a husband and three young sons.

Years after her death, the grieving parents commissioned a stained-glass window from one of the nation’s foremost studios— a triptych memorializing their daughter— to be displayed in their church, where she had played piano and organ.

At the time, the studio’s owner, John La Farge, was ahead in a race with rival Louis Comfort Tiffany. La Farge had been the first to patent a technique that made stained glass glow by layering glass rather than painting on a single surface. But La Farge didn’t maintain his lead. Despite substantial success and prominent commissions, he ended up bankrupt. Tiffany, whose father Charles Lewis Tiffany owned an established retail jewelry enterprise, eventually triumphed, and his work became far better known.

The window is attributed to John Humphreys Johnston, assistant to La Farge. Two other windows attributed to Johnston can be seen at the imposing Church of the Ascension, which stands on the corner of Fifth Avenue and Tenth Street in Manhattan.

Commissioning work from what was then the top studio of the day may have presented a financial challenge for the Cranes. The year Mary died, her father faced not only personal tragedy but also an audit. Subsequent adjustments to his will suggest diminished circumstances, according to a document filed with the National Register of Historic Places. “This was not an impulse purchase,” notes Curry, speculating that the nearly ten-year lag between Mary’s death and the window’s completion may have allowed Augustus Crane to save up funds. “It was something they planned for.”

The window depicts St. Cecilia in a dramatic pose; eyes raised to Heaven, watched over by angels, an instrument by her side. The inscription at its top reads: St. Cecilia. At its bottom: “Placed by Augustus and Mary E. Crane in memory of their daughter Mary.”

“When this daughter died, the music died for that family,” Pongracz notes. “It’s so poignant.”

The Cranes had the window installed at their church, Morristown’s Church of the Redeemer. More than a hundred years later, concerned about its condition, the church contacted the Morris County Historical Society, which agreed to pack it up and send it to its spiritual home, Acorn Hall.

There it will soon stand on display in what was the family’s art and portrait gallery, in the back of the house, adjacent to the rear parlor where a Chickering piano resides as another reminder of Mary and her musical achievements. A custom light box will showcase its rich colors and contrasts.

“It’s significant to Morristown, the state, the history of American stained glass and American decorative arts,” says Pongracz, who has worked on Tiffany projects at the Morse Museum in Winter Park, Florida and at New York’s Metropolitan Museum.

For decades after Mary’s death, successions of Cranes and their descendants occupied the house, sitting on the same settees, surrounded by familiar paintings and original curtains and carpets, having servants light the same coal fire. It took an outsider—Alice Castleman of Lexington, Kentucky (who joined the family by marrying August Crane Hone, son of Mary)—to modernize the place by adding indoor plumbing, electricity, and heat in the 1930s.

In the 1960s, her daughter Mary Crane Hones, who’d lived for years at Acorn Hall after her mother died, decided to donate the house to the Morris County Historical Society. The deal, closed in 1971, included the building and three-and-a-half acres of land. As a result, the Society celebrates two anniversaries this year: the 50th anniversary of that turnover and the 75th anniversary of incorporation. Crane gave another three acres of her property to the Morris County Park Commission.

Today, after a number of restorations, most recently of the exterior, Acorn Hall “looks like it did when Augustus and Mary Crane moved in,” says Curry. The latest $1.5 million restoration, finished in 2019, revived its dark 1860-1880 paint scheme (in the 1930s the paint was white). Restoration of the carriage house behind it began in 2020.

While the towering oak tree that gave Acorn Hall its name hasn’t survived, the Park Commission land behind the house still hints at the kind of terrain that once bordered the Crane home. At the far end of the back lawn, a black handled gate opens onto a rough grassy trail, part of the Patriot’s Path, which leads to the mansion George and Sara Frelinghuysen built as a summer home on 127 acres in 1891. Then known as Whippany Farms, the property is now home to the Frelinghuysen Arboretum.

The un-crowded one mile walk from Acorn Hall to the Arboretum takes a visitor through woods and past the running and surprisingly clear waters of the Whippany River. Down the hill stands the site of Jacob Ford’s 1776 powder mill, its historic marker making a lonely stand. The mill supplied gunpowder to the Continental Army. It is hidden but not far from the Ford Mansion just up the hill, one of the country’s earliest national historic sites, where George Washington headquartered his family and his troops.

Inside the Arboretum, mature trees, wide lawns and gardens spell retreat. On the way back to the Acorn Hall, a detour across the corner of a parking lot offers the chance to stop for a farm-to-table meal at Blue Morel, a stylish restaurant with an appealing wine bar located in a corner of the Westin Hotel, adjacent to Acorn Hall.

While the relentless noise and sight of busy Route 287 North intrude on any illusion of solitude on the trail, they also serve as a reminder of the role preservation can play in the fate of natural and built resources.

Perhaps no one understood this better than the modern Mary Crane Hones, named for the Mary who inspired the window. While living at Acorn Hall in 1966 this Mary rebelled against construction of the new interstate highway that threatened to disturb her family home and neighborhood. An international activist, ardent Democrat and actress, she and a friend protested the project by staging a dramatic stunt: trespassing and sitting defiantly in the bucket of a steamroller on the highway’s worksite. Her efforts failed to stop the project, and the Interstate forged its way North, passing barely 1,500 feet away from Acorn Hall and robbing her ancestral home of peace, quiet, and privacy.

Mary retreated to Nantucket, Massachusetts. But far from turning her back on Acorn Hall, she left its future in the hands of a trusted Morristown friend, Patricia Eldredge, who shared her interest in history. Eldredge enrolled in an historic preservation program at Columbia University to prepare for the task of turning the Crane home— drawers, closets, attic and basement still full of personal items Mary and her ancestors left behind— into a house museum.

“I’ve always felt the marks of time are part of the whole thing, and I didn’t want Acorn Hall to look new,” says Eldredge, who was honored for her efforts with a Lifetime Achievement Award about her preservation philosophy. “That’s why Mary wanted me for Acorn Hall.”

In the end, the tragic loss at Acorn Hall that led to the creation of window could make a significant contribution to historic preservation even beyond New Jersey’s borders. “This potentially has a national audience,” says Leslie Bensley, Executive Director of the Morris County Tourism Bureau, of the window. “Because this is so important and rare and has a real sense of place.”

A Storied Past: History That Made Morris County

On the occasion of the Morris County Historical Society’s 75th anniversary, the county’s vibrant history is told through the remarkable objects and images preserved within the collections and archives at Acorn Hall. 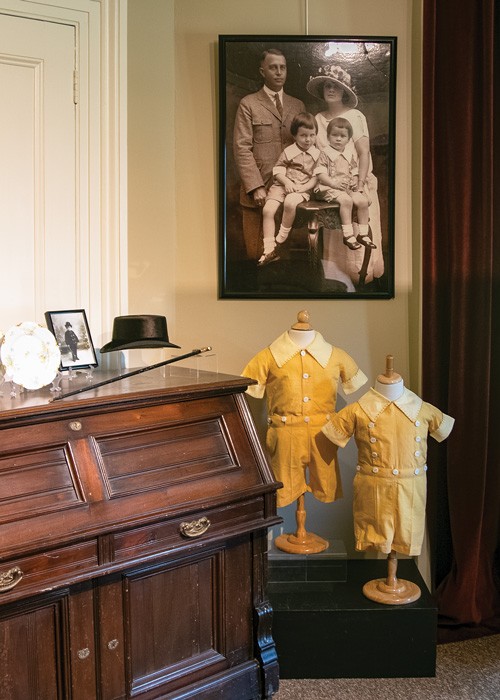 Mr. and Mrs. Jesse McEwan, Jr., of Whippany, posed for this 1920s family photograph, their two sons wearing the matching outfits below the picture. 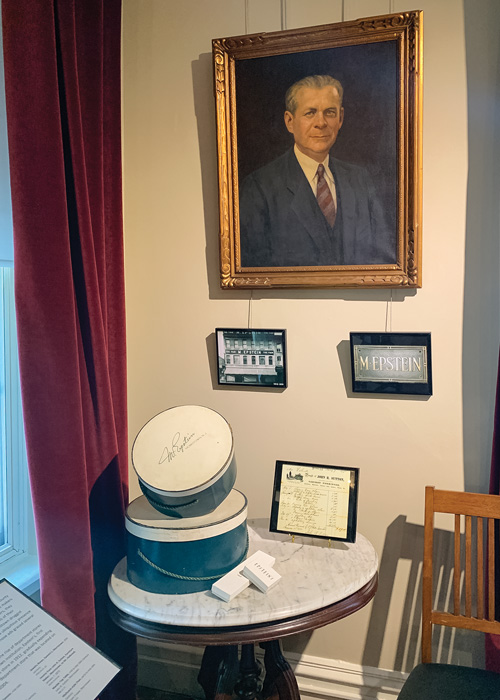 A portrait of Maurice Epstein and other items commemorate Morristown’s institution which first opened as a dry goods store in 1912, gradually expanding into the venerated Epstein’s department store that was located on the Green until 2004. 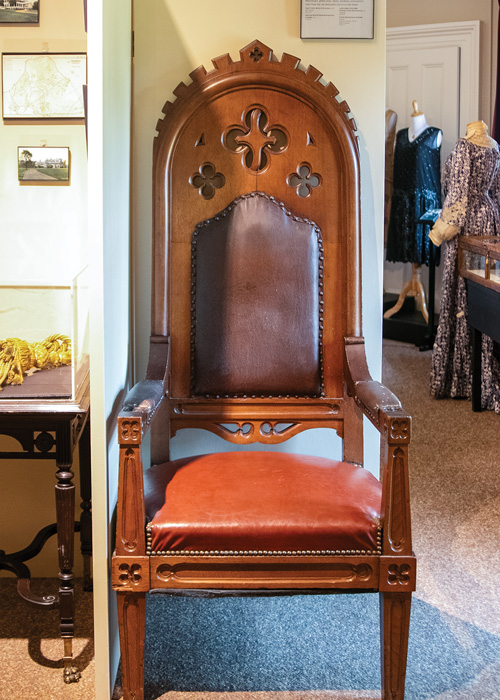 This pastor’s chair resided at the Bethel African Methodist Episcopal Church, built on Spring Street in 1874. 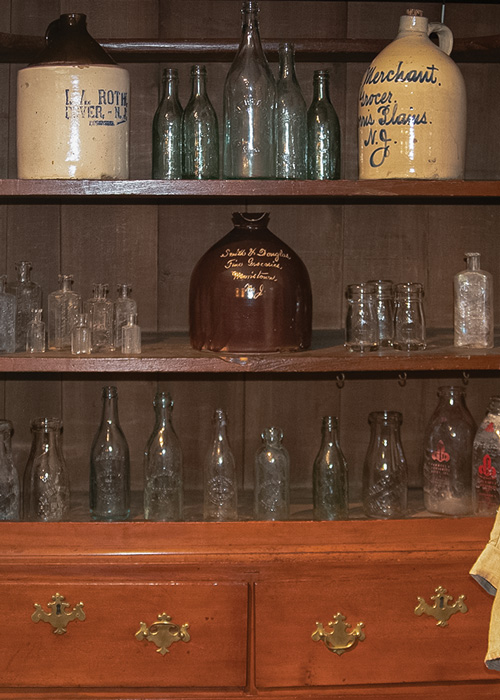 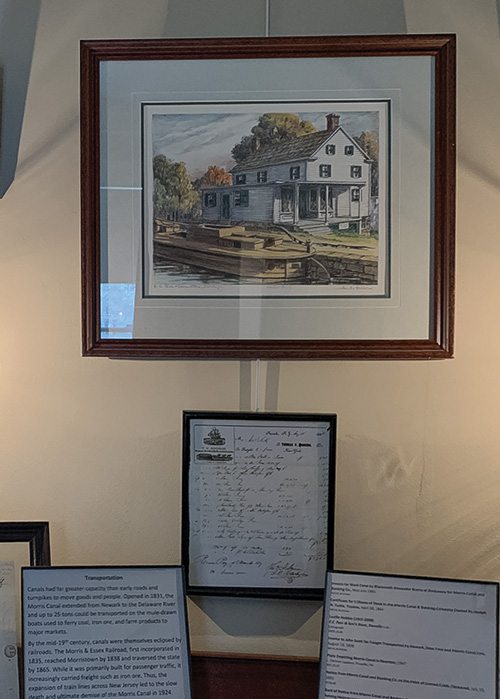 The mighty splendor of the Rockaway River gorge traces a forgotten industrial past.

This story was first published: Summer, 2021