A few years after we moved into our home, Trish and I finished off the basement, creating two rooms, one for her art supplies and the other for my fishing paraphernalia. On one wall of my room, in between artwork by Winslow Homer and John Swan, hangs a photograph of my father. It's set above my fly-tying table, across from the shelves where my fly-fishing books are stacked. The photograph first appeared in print in the Winter 2009-2010 issue of Skylands Visitor Magazine accompanying an essay entitled Christmas Trout about my relationship with my father. Recently, the essay was accepted by Birch Brook Press for a soon to be published anthology of fly-fishing stories. 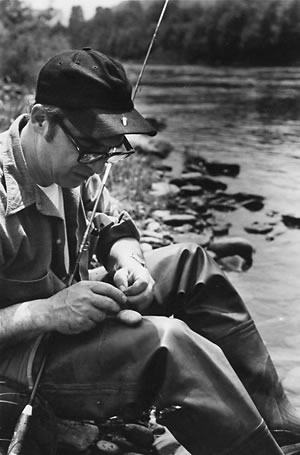 In the photograph, my father looks through eyeglasses while working on his line, a fiberglass spinning-rod cradled in his lap.

My brother, perhaps seventeen at the time, snapped the black-and-white picture while our father was seated along the shoreline of the Beaverkill, one of the Catskill's most historic rivers. Just downstream stood the Atrium Lodge, a meeting place where the fly-fishing elite once gathered to drink gin and tonics and discuss tales tall of hook-jawed, honey-bellied brown trout and where the three of us spent that weekend in late April 1973, the year after I graduated from college. It had been a rough few years, not only for a nation embroiled in an unpopular war, but for a father and son unable to agree on much of anything, my father and I calling a truce to pursue the sport we both loved.

While I was a kid, no more than five or six years old, my father spent his weekends fishing with a co-worker, the two young men exchanging their jackets and ties for khaki pants and open collar shirts while casting their lures and artificial worms to the bass and bluegills that inhabited the lakes of Harriman Park located just over the New York State border, only a short drive from our suburban home in Bergen County.

I recall the first time they invited me along. I couldn't have been more than nine, my brother too young to tag along. It was a humid evening in late June, my father and I driving up to the lake where his friend waited with an aluminum pram purchased the previous summer. Frogs croaked along the shoreline, dragonflies flitting around my head, their large eyes staring into mine while my father and his friend took turns rowing. I remember watching silently from the stern until the bats began to zigzag over our heads, the two men casting Hoola Poppers into the weed beds and around submerged tree stumps, reeling their lures in fits and starts across the placid surface of the lake. On every third cast or so the water would erupt, a voracious bass breaching the surface.

While away at college I grew fond of moving water, setting aside my spinning reel for a fly rod, cultivating an interest in trout rather than bass. Back home my brother was spending his time tinkering with things mechanical, becoming interested in photography, never having cared much for lake or stream.

I remember the afternoon that he took the photograph that now hangs on my wall, for it was the first time I ever caught a brown trout on a fly. Prior to then, I had taken small brookies with worms and shiny lures, but had been trying unsuccessfully for more than a season to fool a brown on a fly, until that gray afternoon in late April when a flotilla of large dun-colored mayflies floated down atop the swollen current, the river's big, fat brown trout rising to gorge themselves on what I later learned was a Hendrickson hatch.

In the photograph, my father looks through eyeglasses while working on his line, a fiberglass spinning-rod cradled in his lap. He is wearing hip boots, the cheap plastic kind you rarely see these days, a tiny daredevil lure hooked through the top of the brim of his favorite baseball cap.

The Atrium Lodge closed not long after that weekend. To my knowledge, my father, younger in the photograph than I am now, never again cast his lures in moving water, and although he lived until age eighty-three, he set aside his fishing rod while still in his sixties. My brother, a graduate of the New York School of Visual Arts, became an accomplished film producer, never once, to my knowledge, picking up a fishing rod. As for me, I can be found this time each year when the forsythia are in bloom and the sun is once again strong enough to warm the back of my neck, casting my flies upon some mountain stream in the hope of finding one more trout to hold in my hand.

Bob's new novel, West of Rangeley, can be purchased through amazon.com or barnesandnoble.com. Email Bob directly for an autographed copy.