The Zookeeper’s Daughter is the journal of Lori Space Day, the third generation at Space Farms Zoo and Museum in Sussex, N.J. Growing up at the Space family farm has given Lori a lifetime full of experiences and stories to tell about individual animals and animal-related adventures. She has worked with numerous different species, from lions, tigers and bears to otters, ‘possums and squirrels. 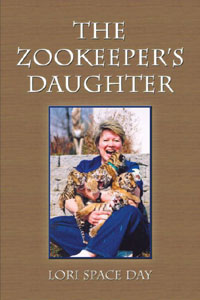 The book describes the challenges confronting a working zookeeper. What do you do during a buffalo stampede? How do you handle a ‘loaded’ skunk? Can a fisher climb trees? What do you feed a newborn lion cub? Where do zoos get their animals from? Who operates on an African Lion with a bad tooth? These questions are all answered in The Zookeeper’s Daughter.

Animals escape, or get sick and yes, tragically, some die. Descriptions of medical procedures performed by Dr. Ted Spinks and staff, of the Animal Hospital of Sussex County, give the reader examples of the complicated medical care involved in working with exotic and native animals in captivity. Stories of daily animal care, medical procedures and infant care are peppered with humor and chock full of information on many different species.
Lori’s stories give the reader a glimpse of the behind the scenes activities at the zoo. “Writing this book has taken me six years in the off season”, states Day. “I was inspired by my Dad (Fred T. Space, owner of the zoo and museum complex). So many of his early adventures in zoo-keeping have been reduced to one liners over time.”

Day started writing her animal memoirs only for her daughter, Jackie. One day, when a visitor to the zoo told Lori “Your life is fascinating, you should write it down,” her vision crystalized. Lori began to create a realistic, educational, yet entertaining account of her life as a working zookeeper at her family’s privately owned zoo. Not a children’s book, The Zookeeper’s Daughter is geared for young adults and animal enthusiasts.
Lori Space Day’s early years were spent alongside her family learning native and exotic animal husbandry first hand. She earned her Bachelor of Science Degree in Biology from Nazareth College of Rochester, N.Y., managed a pet shop and later returned to work in the family business. A renowned multi-specie pediatric specialist, she is the Zoo Mama.

Ms. Day has been writing articles professionally for Space Farms for the last ten years, and is frequently published in zoo trade magazines. She has also written for The Sussex County 4-H program, Wantage Township and the New Jersey State Fair/ The Sussex County Farm and Horse Show. Attending the Working Writer’s Workshops, sponsored by the Sussex County Arts and Heritage Council, gave her the information and encouragement needed to pursue publishing her book.

The Zookeeper’s Daughter is three-hundred and fifty seven pages of animal adventures filled in with enough personal biography to keep the book moving from Lori’s first animal escapade in 1956 to the close of 2003. The book’s retail price is $24.95. Email for more information and how to order. The Zookeeper’s Daughter is also available at the Space Farms Zoo and Museum Gift Shop.