The Black Plague had devastated Europe when the acorn pushed its roots into the soil of an unnamed continent. While Europe struggled with poverty, famine and war, the sapling grew into a tree; Woodland Indians hunted, fired pottery, planted small crops and perhaps rested against the oak's expanding trunk. Native Americans knew how to boil tree bark and use the wash as an antiseptic or astringent to sooth rashes, ulcers and burns. If they used the tree as a medicine chest, they did no harm. The tree's girth expanded through the fourteenth and fifteenth centuries, when Leonardo da Vinci painted The Last Supper and Columbus sailed the ocean blue; it grew during the Sack of Rome and Elizabeth's reign of England. By the time settlers founded Jamestown in 1607, the oak had passed its 200th birthday. When Europeans purchased land in soon-to-be Basking Ridge from the Lenni Lenape Indians, the tree had become a mature giant. With its hard, close-grained wood, oak would become one of North America's most important trees. Despite the settlers' growing need for houses, barns and fencing, the tree prospered as a local landmark. Under its spreading boughs, an English evangelist preached to 3,000 people in1740. A few decades later, Continental troops would picnic in its shade. By the nineteenth century, the Basking Ridge Presbyterian Church had enshrined the venerable oak behind the cemetery walls. When it was finally taken down in 2017, metal pillars support its massive limbs. The old oak ­ was more than six hundred years old and stood 97 feet tall. Thick branches extended 156 feet over the ground. 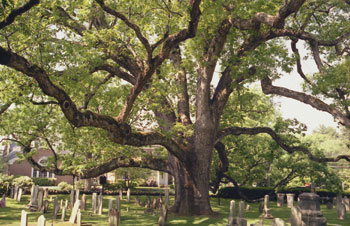 The oak tree at the Basking Ridge Presbyterian Church was more than six hundred years old before it's demise in 2017. Photo: Melinda Nye.

Counties across the state have formed shade tree commissions to protect and tend the beautiful, the plain, the ancient and the simply big. Ralph Coppersmith, Volunteer Chairman of the Warren County Shade Tree Commission, is a strong advocate for preserving and planting trees. His reasons are straightforward: "They're good for the environment. They prevent soil erosion. They're a renewable resource." Ralph Coppersmith's voice changes when he talks about the big trees. Awe mixes with enthusiasm when he shares stories of trees that served as magnets for the community.

In the 1860s people came to Great Meadows to see a dying sycamore that measured fifty-two feet in circumference at its base. It must have looked vaguely skeletal, with its naturally mottled gray bark turning bone-white on the upper branches. Visitors stood inside its hollow trunk. Jean C. George, author of a children's book about a runaway boy who made his home in the cavity of a decaying tree would have approved. When Great Meadows' sycamore finally came down, trunk segments toured the country.

An old beauty still stands just south of Hope on Route 519. When the main lead became sick, the WCSTC preserved what they could. Local legend claims that General George Washington rested under the tree in July 1782 while Bishop Ettwein traveled on to Hope for supplies. No longer tall, the tree has been restored to good health, and its trunk is thick enough to display an American flag. 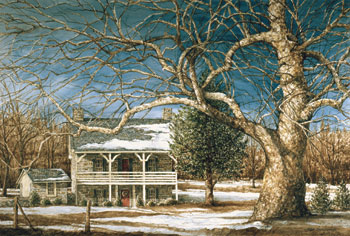 According to the 1939 book “Noteworthy Trees of New Jersey”, these old limbs offered respite for George Washington in July, 1782, as the General passed through the Moravian village of Hope on his way from Philadelphia to Newburgh, New York. This Dan Campanelli rendition was commissioned for the current owners of the Swayze Inn Farm over which the famous sycamore presides.

Aging a tree is a matter of speculation. "The only way to know for sure is to take a tiny core sample" says Ralph Coppersmith, "and then to count the marks left by tree rings. We don't do it. The tools aren't common, and why damage the tree?" The county owns ­ and bears responsibility for - all the trees in the right of way along 250 miles of county roads. Pruning, installing lightning rods, arguing with utility companies, the WCSTC steps in as advocate to protect the fragile giants. It also promotes education and appreciation for trees. At this summer's Warren County Fair volunteers will distribute pamphlets and promote contests to identify trees and leaves ­ and to see who can find the largest specimens.

Lush old trees line the streets of Belvidere, the edge of the Pequest River, the outskirts of town. They crowd the town square and plug the gaps between houses. Children (and their parents) build tree houses in the forks. In front of the county courthouse, a 162-foot sycamore might be the tallest in the state. At the base of Mill Street, a sharp right into an alley leads the curious to another sycamore. Twenty-nine feet in circumference, it is perhaps the largest tree in the state.

On 4th Street in Belvidere, visitors can fine what might be New Jersey's second largest white walnut, a.k.a. the Butternut Tree. Large walnut trees are not always easy to find; their life span seldom exceeds 80-90 years. A short life on earth, a long history of use: yellow, brown and black dyes were once obtained from its bark, twigs, leaves and roots. Native North American Indian tribes, and later settlers, extracted various remedies to treat multiple ailments: rheumatism and arthritis, headaches, constipation, wounds, etc. An infusion of the dried outer bark was once used in the treatment of toothache and dysentery; the oil from the nuts has been used in the treatment of tapeworms. The coarse-grained wood, while light and not very strong, can be beautiful.

One tree in town provided its own unique service. Near the town square, hemmed in by a parking spot, sidewalks and roads, an old white oak known as The Shoe Tree still graces the neighborhood. According to town lore, two centuries ago many country folk walked barefoot from April to November. (One man apparently protected his feet with tar and a layer of sand.) Shoes were precious belongings, but country folk did not walk barefoot everywhere. Prior to Sunday services, the locals pulled on their shoes by the white oak tree. Thick, squat and scarred, the tree shows signs of stress. Plans to widen local roads forty-years ago almost doomed the tree. Letters of protest arrived from around the country. Town plans changed, but tragedy followed; a speeding motorist crashed into The Shoe Tree. "The insurance country sent an arborist," Mr. Coppersmith recalls. "But there wasn't much anyone can do. The oak won't survive the trauma. It was too much, combined with environmental pressure. The roots can't draw enough moisture from under the roads and sidewalks." When the tree finally dies, Belvidere will lose a treasure. Until then, it continues to serve as a gathering point.

The Big Tree Program coordinated by the New Jersey Forest Service identifies and catalogues the largest individual trees, by species, in the state. Anyone with a notable tree can fill out a New Jersey Champion Tree Nomination form. Eligible trees include those native to New Jersey and trees that can reproduce in the state's climate. Members of the New Jersey Forest Service measure, photograph and write-up a report on nominated trees. (The Big Tree publication offers the most comprehensive listing to date.) The largest red oak, near the Musconetoncong River in Warren County, measures 20 feet and 1 inch in circumference.

But the State Champion Great Oak can be found at Duke Farms in Hillsborough. On June 13, 1950, by a joint resolution, the red oak became the official state tree of New Jersey. One of the largest trees in New England, it can reach 100 feet; its deep roots often keep it from toppling in strong winds, hence the expression "the mighty oak". Visitors to Duke Farms can find the champion tree a short distance from an old carriage house. At the open edge of a field, without competing trees to restrict its growth, the branches extend out and down, creating a thick, low canopy. Clearly hoping for a long-life for the two-hundred year old tree, Duke Farms has strung wire along the tree to serve as a subtle lightning rod. 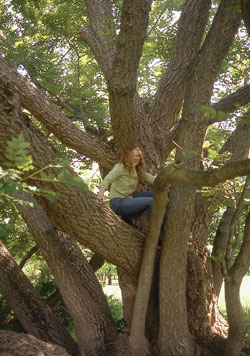 On the same tour visitors might spot the farm's State Champion Amur Cork Tree. Its bark resembles that of a true cork tree, although it is a different species. Named for a boundary river, it comes from an area between Siberia and China. Multiple trunks, with low branches, rise from the ground, making it a tree climber's delight. Rough spongy bark provides a strong, thick surface. Adults can easily hide in the maze of branches.

Biggest, oldest, best? In Clinton, at the edge of the South Branch of the Raritan River, a giant sycamore looms over the shallow rapids. In 1763, when the first mill was erected, refuse swirled downstream around the tree's roots. Today, fly fishermen cast in its shade. The massive trunk now incorporates a wrought iron fence and a retaining wall. It towers over customers at the local cafes and restaurants like a California Redwood. Locals insist the Clinton sycamore is the oldest in the state.

Old sycamores are among the easiest big trees to find. They have survived for a simple reason: the wood has a pretty grain, but is difficult to work. It often turns up in butcher blocks. The trees are also known as buttonwoods, because their seeds look like buttons. "Truthfully, they might have been used as buttons," say Ralph Coppersmith. "They weren't used for much else. But sycamores are good around streams and rivers. Beavers will make their homes in the roots. The trees are too hard to chew."

With effort, hikers can see how New Jersey's landscape might have looked before widespread farming. In Stokes State Forest, old stands of hemlock are threatened by an Asiatic pest, the wooly adelgid. In High Point State Park, however, old Atlantic White Cedars grace the heart of a bog. According to Park personnel, some trees date back two hundred years. Given the popularity of cedar, their survival is unusual; conifers were felled in vast numbers for boats, decks, furniture, etc. Naturalists attribute the survival of the stand to its remote habitat. Today, anyone interested in seeing the trees can look for them off the Cedar Swamp Trail.

Dedicated arborists tend trees through ice storms, pests, fungus, and an onslaught of pollutants. With time and luck, a tree might become a legacy for generations. And for those with limited space in their back yard, Mr. Coppersmith offers a simple suggestion: "Come out and see the trees."