Walk into Roman Osadca's barn and it's not horses you smell. It's that white papery bulb that wards off vampires and the common cold. Arranged just so on three rows of 4 by 30-foot drying screens piled three screens high, the garlic sits right side up, their stalks in the air, looking like little white soldiers. At the head of each row a large pedestal fan has been running day and night since July 4 passing air over the bulbs, drying and curing them, concentrating their flavor. 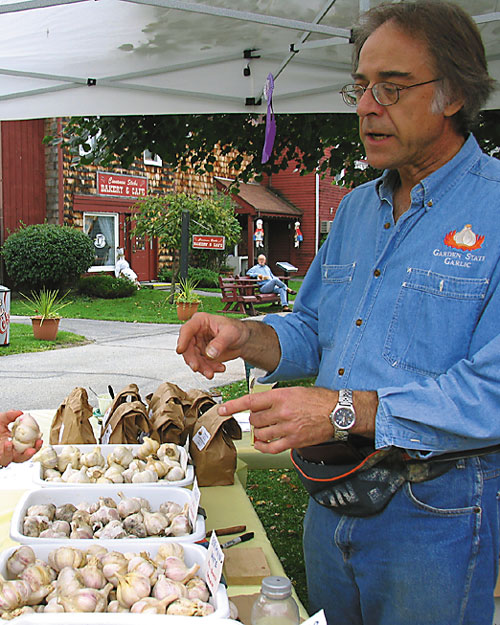 Now, the well-dried bulbs have finished developing their own flavors, unique to each variety. They await Osadca's discerning hand for picking just the right bulbs for sale at any moment. Osadca grows 152 varieties of hardneck garlic at Valley Fall Farm for his family's use; and just because he's crazy about the bulb. He also sells to restaurants, chefs, farm stands and garlic collectors. Someday ­ maybe next year ­ he may grow more of the 600 globally-available varieties.

Osadca dug his hardnecks out of the ground in July, but what happened before that started last fall. The process began as usual ­ in mid-October he planted the cloves and within a few days they started to root. In the warm fall, each shoot grew two to three inches. By the time the ground froze, the roots were a foot long and the shoots hunkered down to stay green all through the winter. This spring, the garlic was the first thing to grow. The small cloves, each supported by a huge root system are in no danger of rotting, even during wet springs. Of course Osadca doesn't plant in soggy soil, either.

With leaves and a shooting stalk converting sunlight to food, the hardnecks began to grow the rest of their cloves and turn into bulbs in June, but not a day before. Softnecks grow just the leaves. So, what's the difference?

Softneck garlic is what you buy in supermarkets ­ mass-produced because the plants are easier to grow in warm climates where the big food farms are. They also store longer ­ up to a year in the fridge. They have no stalk in the middle; they're low on flavor, hard to peel, and have several layers of 10-25 smallish cloves. A hardneck, though, is specially grown, has a tall stalk in the middle, exquisite flavor, a short shelf life, and a single ring of 4-8 large cloves with three times the anti-biotic content as a softneck. Plus, they're easy to peel.

At the beginning of June, the hardneck's stalk grows upward and goes into a 360 degree curl. It forms a swelling that contains a bulbil with 100-200 mini-cloves genetically identical to the mother bulb down below. The bulbil, the plant's secondary form of reproduction, dries over the summer, falls over, opens up and spills its tiny cloves on the soil.

When the stalk was still young and green and the bulbil fresh in the curl, Osadca cut it off mostly to redirect the plant's energy to grow a bigger bulb in the ground. If you leave the stalk with bulbil (a.k.a. garlic scape or garlic flower) on, the bulb will be 20 to 40 percent smaller. But don't throw that bulbil away. It's good to eat.

So in June he took the cut green scapes into the house, blended them up with olive oil, pine nuts and cheese, and made pesto. They're also delicious on salads ­ crunchy. He eats his garlic mostly fresh because he knows that when raw garlic gets crushed, two of the chemicals present in the bulb combine to make a sulfur compound that creates a potent antibiotic and also gives the garlic its taste.

"The best way to thoroughly crush garlic is by smashing it sideways to give it the maximum amount of macerating to combine the two chemicals," says Osadca, a chemical engineer who works in quality control and production at Roche. If you want instantaneous flavor, smash it up. If you want slow release, slice it up and put it in a saucepan. 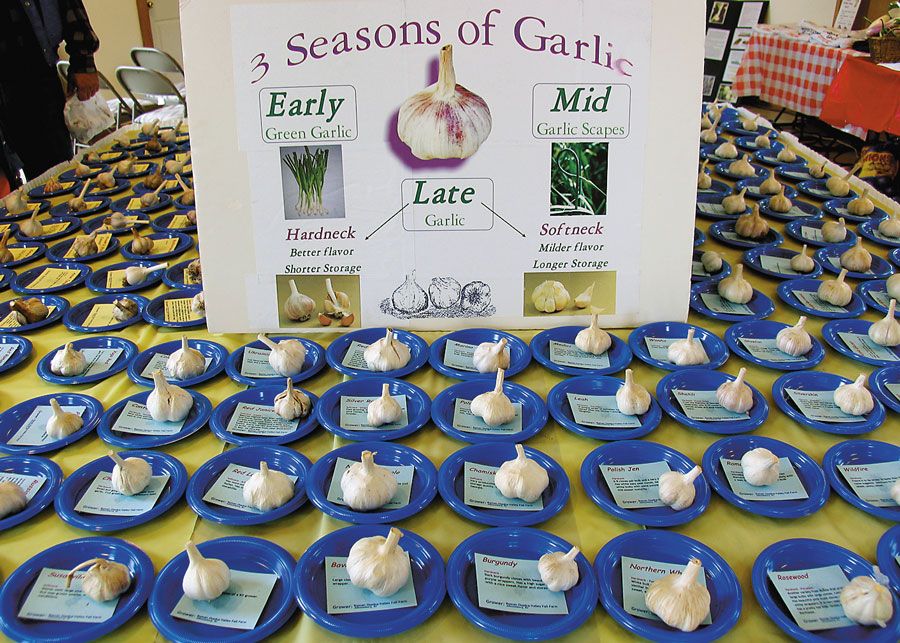 The amino acid alliin and the enzyme alliinase make allicin, the garlic plant's defense mechanism that tastes, smells, and feels bad to unwary predators except some humans. The two chemicals stay dormant when the plant isn't handled, so the antibiotic and maximum flavor is saved to exist only at the time of use. "You get the most antibiotic by eating it raw at room temperature," Osadca says. "Heat destroys the antibiotic."

Once smashed, garlic, a.k.a. "nectar of the gods," "camphor of the poor" and "stinking rose," retains 100 percent of it's antibacterial potency for 24 hours. After that, allicin changes and its antibacterial properties dissipate, but the papery antioxidant bulb still kills viruses, cleans arteries, dissolves plaque, thins blood, and lowers bad cholesterol. And for women, it cures yeast infections. To top it off, garlic goes after only bad bacteria, not the army of good guys in your intestines. Why would anyone not want to plant it and eat it?

Osadca and friends faced that very question three years ago when they founded Garden State Garlic, a loose organization of people who want to eat and plant great garlic, and learn about it. It's on the web at www.garliconline.com.

Plant your garlic two inches deep, six inches apart, with one foot between rows. Garlic bulbs swell in the beginning of June and only grow until the summer equinox, being daylight sensitive plants. If you plant later, they won't grow. Harvest the bulbs in late June/early July. If left in the ground, the paper breaks, dirt gets in and the bulbs rot. Good softneck varieties include Red Toch, Transylvanian, and Inchellium Red. Some of Osadca's favorite hardnecks include Music, Legacy, Spanish Roja, Italian Purple, and German White.

Osadca's advice to gardeners who will now want to grow garlic of their very own: "Some garlics from all over the world do well in Northwestern New Jersey soils and climate. Some need several years to acclimate and grow well. Be patient."

This October, Osadca will be out planting cloves of rare varieties by hand in raised beds in an area the size of a football field. He'll tag them, map them, test some, and just keep planting others to keep them propagated. Then he'll hop the tractor and plant four more acres ­ all in garlic. Want some?