A well-used blue pickup truck drives slowly along a gravel drive lined by innumerable pieces of steel pipe, rail, large rusted mechanical parts, old road signs, crumbling vehicles, and other forms of.... junk? Nestled in the pickup bed is more... salvage? The driver carefully maneuvers the truck bed near a huge forklift where he steps out of the truck and casts an admiring glance toward three old road signs mounted on a concrete signpost, his face wearing the smile of a lottery winner. These signs are treasures, just a few of many located here on the grounds of the former Phillipsburg water company.

Bill McKelvey, the pickup driver, explains that this "salvage yard" is actually a temporary storage site for some of the many items destined to become part of a permanent collection of the NJ Transportation Heritage Center. Pieces of rail, parts of bridges, lampposts, benches, spare parts, etc. ... and signs, lots and lots of signs, stashed with everything else, waiting for an official new home. As McKelvey walks around, pointing here and there, barking non-stop commentary, it becomes clear that not only were the old signs functional, but they are also works of art. 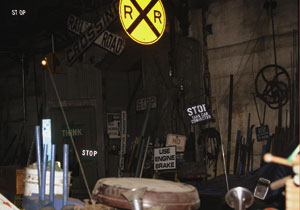 The highway marker from 1754 near Johnsonburg

The mile marker on South Main Street in Phillipsburg

Some of these antique signs were formed by carefully prepared casting molds, others were hand-painted, and still others were carved... just like other forms of artwork. Some are mounted on posts, or hung from dark walls within the massive pump house, or lean against walls and railings. Not far from the pump house, a metal storage stands guarded by two sentinels, a nicely restored Mack dump truck and an equally beautiful refurbished mine car. Inside, hundreds more signs hang on walls or rest on the floor shared with two renovated public transit buses and countless other relics.

One of New Jersey's (and the nation's) oldest highway mile markers can still be seen a couple of miles south of Johnsonburg in Warren County. Originally placed in 1754 ­­ today surrounded by a wrought iron cage­­ the ancient slab of roughly shaped rock proclaims "2 to LG". This cryptic inscription means "2 miles to Logg Gaol", referring to the original name for Johnsonburg, when it hosted the county jail, made of logs. A mile or so away from McKelvey's storage site, another early mile marker still sits on South Main Street in Phillipsburg, across from the Morris-Andover School. It too has been shaped from native rock, lettered in a strange style to say simply "44 miles to N Brunswick". Resembling a grave marker more than a mile indicator, hundreds of people pass by this ancient guide each day without reading it or realizing its significance.

We will be fortunate when Bill McKelvey and other dedicated members of the Friends of the NJTHC are successful in their quest to commemorate New Jersey's transportation heritage.

This story was first published: Winter, 2006