Those of us who fish with flies spend the months of April, May and June playing tag with trout while wading through brooks, streams and rivers. A fly fisher in northwest New Jersey can find both stocked and wild trout in the Big and Little Flatbrook Rivers, Van Campens Brook, Dunnfield Creek, the Paulinskill River, Jacksonburg Brook, Yards Creek, the Pequest and the Musconetcong Rivers to mention a few of the better known streams.

Trout thrive in cold, clean water and stream temperatures exceeding seventy-eight degrees can be potentially fatal. By the middle of June, this can become a problem in New Jersey. By July the weather becomes oppressive with high humidity and temperatures in the nineties with few self-respecting trout willing to rise to a fly.

This is the time of year when many anglers abandon their home waters for the shore where they are able to fly fish for stripers, blues and weakfish in the bays and ocean from Sandy Hook to Cape May. Others pull out the spinning rod from the back of the closet, hitch the boat to the pickup and head for the largest lake, maybe Round Valley Reservoir, Spruce Run Reservoir, Lake Hopatcong or perhaps one of the Swartswood Lakes. There is, however, an alternative to traveling long distances or purchasing and maintaining a boat.

Northwest New Jersey has countless small lakes and ponds. Most contain warm-water species eager to slam a fly. Small and largemouth bass, pickerel, crappies, perch, bluegills and various species of sunfish will rarely allow a fly to slip by without a strike. For this reason, I continue to fly fish during the warmer months while remaining close to home, enjoying the intimacy of those smaller waters where boats are rarely seen. 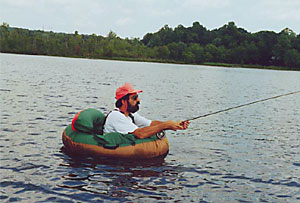 Most summer evenings I will drive to a pond a few minutes drive from my home in Blairstown and not much different than many others throughout this corner of the state.

It is roughly oval-shaped, consisting of approximately three acres with submerged stumps at one end and lily pads and reeds along the other. The water is shallow on one side, but there are a number of deep holes off of the far shore where blueberry bushes grow down to the edge of the bank.

During the summer, solitary bass, their mouths large enough to swallow a softball, will lurk around sunken logs, submerged boulders and rotting stumps. These brooding creatures will strike at most anything cast to them, the bigger and uglier the pattern the better. They have been known to devour their own kind, as well as frogs, ducklings and the occasional infant playing too close to the water's edge.

On most nights, the fish of this pond are very accommodating, engulfing anything cast near them. I can be assured of always finding pan fish willing to chase my fly on the rare occasions when the bass are off their feed, bluegills and pumpkinseeds being suckers for any straggly fly trolled or slowly retrieved by hand across most parts of the pond.

There is a wooden walkway that extends out to a floating dock, which is where I put in. It is a little past seven on yet another humid summer evening. There are a few cumulus clouds overhead in an otherwise clear blue sky. From the scrub pines, I hear the slurred tee-err of a red-winged blackbird. A few swallows circle over the surface of the pond. One swoops down to catch an insect.

It will be an hour before the sun goes down; even then, the temperature will not fall below seventy-five degrees. Soon, I will be dodging kamikaze bats dive-bombing my fly. At the last moment, expert sonar always discovers the error, and with what appears to be an errant change in direction, the tiny mammals dart past the imitation toward any mosquito unfortunate enough to come within range of their detection.

I walk from the shore down the wooden planks to the dock, lugging my old belly boat over one shoulder, carrying fins in one hand and a nine-foot graphite fly rod in the other. In my chest pocket is a small box that contains a few Woolly Buggers and other large streamers tied especially for the big bass of this pond.

Struggling into the middle of the belly boat, I awkwardly place one foot and then the other into the tube. I take care to lift my butt up off the dock in order to avoid catching a splinter in the already heavily patched Neoprene waders and slide into the pleasantly warm waters of the pond, with my legs hanging below the fabric seat that lies between the sides of the tube. I then stretch over the front to place a rubber fin on each foot. Turning the boat around, I grab the rod from the dock, and with a kick of the flippers propel myself backward.

I begin casting toward the shore, the fly line arching behind my shoulder, then sweeping forward. A bass erupts from the surface, but I pull back prematurely and the pond returns to its earlier tranquility. Leaning my back against the inner tube, I slowly kick my feet, allowing the wide fins to propel me backward around the perimeter of the pond. A few painted turtles take in the last of the sun, their legs stretched outward along a log. Dragonflies hover over the surface, one swinging over to check me out. A water snake lifts its head up from the water and then slithers away. Frogs begin to croak.

I can think of no more decadent manner of fishing than to cruise along the shoreline of a familiar pond suspended from a belly boat on a warm summer evening. After an hour, the hard edge of my concerns begins to blur while I cast toward stumps and patches of nondescript reeds. The ease with which I am able to raise these non-selective fish and the sheer pleasure of drifting across the pond eventually dispel any lingering troubles. The evening progresses effortlessly toward nightfall as I sit suspended waist deep within the lukewarm womb of the little impoundment.

Fishing well after dark, I lose count of the fish that batter my flies. Sometime after nine I reluctantly pull myself onto the dock where I sit looking up at a moonless sky. Overhead, I make out the Big Dipper and nearby Cassiopea. Looking closer, I find the Little Dipper with the tip of its handle rotating around Polaris, the North Star. I wait for a meteor to flash across the horizon, but none appears.

Only in Spielberg movies, I think.