Look and listen for the signs of spring! Let your senses soak up the season — its fleeting beauty, warmth, scents, and most of all the peace and rejuvenation in its experience.

It once was thought that the American Robin was the harbinger of spring, but not so, says Pat Scheuer, NJ Audubon Lorrimer Sanctuary Director. The robins you see here early in the year, even during winter, most likely migrated south from Canada. When our warm-weather residents do return, the males strut with puffed up throat, spread tail and fluttering wings to attract the females. Sometimes, groups of males chase females. The adaptable robin lays blue eggs in nests of twigs and grass, in shrubs, on the ground, or in nooks and crannies on buildings. The male usually cares for the fledglings while the female sits on the next clutch of spring babies.

The surest sign that warmer days of the new season are not far ahead is the mating call of the Spring Peeper, a tiny tree frog with a big, jingle bell voice. If you’re near a woodland pond, stream, swamp or vernal pool, you will hear an intense chorus of hundreds of males chirping their evening song. Perhaps a thousand tadpoles will soon emerge from each clutch of eggs, beginning their magical eight-week metamorphosis from gills and tails to lungs and legs. 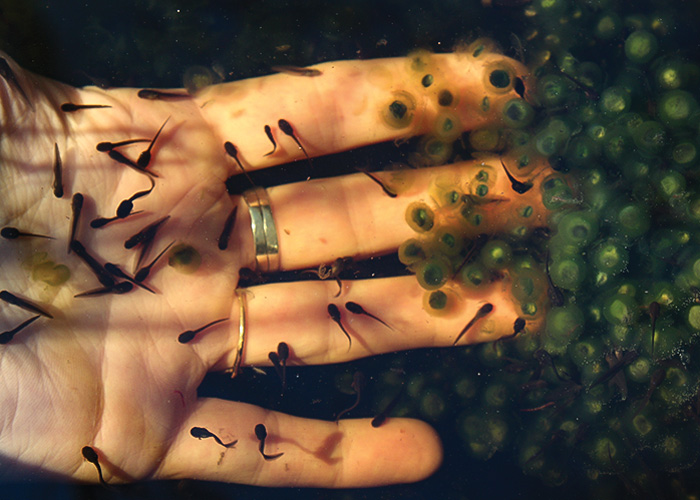 Aquatic environments host a show of other spring creatures, including beautiful dragonflies and damselflies that mate in flight. Depending on the species, the female deposits eggs in the water, in sand, on floating plants such as lily pads and on stems of emergent plants such as arrow arum and pickerel weed. The Green Darner cuts a slit in the stem of a submerged plant where she lays her eggs, then in warm weather the larvae crawl to land and transform to adults. The female Short-stalked Damselfly lays her eggs in wet wood, and the Twelve-spot Skimmer drops her eggs on the water’s surface. Look for nymphs on stems of plants or the adults fluttering around the water’s edge.

Mayflies, a common spring sight near shallow streams, are ancient buggers from 350 million years ago with 550 species in North America. Some burst from the water in the evening and fall to the water’s surface with flattened out wings, dead before dawn; an event known as “spinner fall” by fishermen whose fly lures imitate the dying insects to attract hungry trout. Some mayflies live a few days, but adults never eat — they don’t have time! When they breed, the males swarm to seize the females and mate in flight. An hour later, the female lays her eggs on aquatic plants where they hatch in two to five weeks as aquatic omnivores, then swim upstream and emerge as adults and die.

The nocturnal river otter was recently spotted in the Paulins Kill. These playful and agile carnivores live everywhere from brackish to freshwater wetlands. They make dens in muddy riverbanks. Females have delayed implantation (they are pregnant but the embryo is dormant) for nine to eleven months. They average one to three five-ounce babies that are blind, hairless and helpless, depending on resources. Males depart after the babies are weaned and come back when the young ones have gone.

Spring awakens a flurry of critters in a pond: Carolina wrens, woodpeckers, muskrats and turtles (snappers and painted). Male Red-winged Blackbirds perch on cattail until they burst, in a feeding frenzy, into swarms of mayflies. Females return later to find an industrious mate who has already staked out territory.

Wetland plants provide food and cover for wildlife, but are also among the most vivid expressions of the serenity and beauty of spring. A walk on the Paulinskill Trail along this calm, pretty river offers a display of Nature’s garden that vies with any cultivated one. Here, on its bank, grow Great Solomon’s seal with nodding white flowers, purple violets that spread by seed, tall blue iris and yellow iris, ferns with fiddleheads in spring, forget-me-nots, flowering viburnum and Nature’s hosta—skunk cabbage. Skunk cabbage pokes its flower spathe through ice and snow, maintaining a temperature of 71° within as long as the air temperature is above freezing. Its skunky scent attracts pollinators. (Bring a wildflower field guide.)

The higher and drier ground of wooded and open uplands and valleys attract a different assortment of wild flora and fauna and their babies. Keep an eye out for spring-breeding birds with their surprising mating and parenting rituals. Most amazing is the male American Woodcock with his elaborate courtship dance from mid-March to early April. To see it, you must be in a wet meadow, moist woodland or thicket at twilight when the flamboyant male soars a couple hundred feet straight up, then slowly spirals down, wings spread and whirring while vocally “peeping” to alert the ladies, and touches down on the exact spot he took off. “There’s always this magic 15-20 minutes,” says Scheuer, who has seen the dance a few times. Ground-nesting woodcocks lay two pinkish or buff color eggs in tall vegetation or leaves.

Northern Cardinals, Carolina Wrens and other birds have already returned from their winter migrations. You can hear the increase of song on a sunny day as they get down to the business of attracting a mate and establishing territory. Northern Cardinals lay three to four multi-color eggs in shrubby areas including those in back yards. Carolina Wrens lay three to seven whitish eggs in open cavities in shrubs; discarded objects like flowerpots, and even in old clothing left outdoors.

When the familiar House Wrens return from Mexico and South America, the male takes the female on a tour of potential nesting sites, but first she decides if she wants to stay with him. Does he have a good song and territory that will produce enough food? Once that is established, they return to the same nest every year. The female may lay two to four eggs inside a hollow tall tree, though 99% of house wrens nest inside a box that a human has provided, says Scheuer. They prefer a box with a small hole to keep safe from marauding birds. For instance, a Blue Jay will eat other birds. And a male House Wren punctures the eggs of other House Wrens, Chickadees and Woodpeckers to eliminate competition for food, space and housing. Family first!

In the woods, on the ridges, and also in human habitat, spring babies abound. “All the things going on — the beauty of it is almost cryptic in heavily organized New Jersey — natural wonders,” says Brooke Maslo, Assistant Professor/Extension Specialist, Rutgers University. Take coyotes that are all around us. They breed in February/March and their pups are born in April/May, four or five in a litter, conditions dependent. Parents bring food and regurgitate it for the pups, who mature quickly. At six months they learn to hunt with mom and dad — the time when you might see a pack, a coyote family. At nine months, they are usually ready to be on their own. These canines are extremely intelligent and very adaptable, able to live either in packs or solitary depending on resources. They will eat anything: livestock, dogs, cats, mice, birds, fruits, vegetables, birdseed, plants, and garbage. They sleep in drains, sewers, underneath sheds, or in abandoned fox dens. All they need is shelter and access to food.

Bats mate in the fall and give birth the next spring. Six species of bats live in New Jersey, plus three migratory species, with big brown bats (less than three inches head to tail) being the most common. Social and intelligent hibernators, they roost during the warm months in protected out-of-the-way places, some of which may be in your neighborhood attics. In late summer bats congregate outside of hibernacula (caves or abandoned mines) in mating swarms for several weeks as males try to mate with as many females as possible. Females suspend fertilization and go into torpor (low metabolic rate) until late March or early April when the weather is warm and ripe with insects for food. They then emerge and congregate in a “maternity roost.” They have just one pup a year, born in May, very tiny about the size of a quarter with no fur and helpless. Sometimes the mother will carry the pup in the roost site. When they are really small they clutch the mother’s belly and could even be nursing when she flies. The pups grow rapidly and by mid-July are able to fly on their own.

On New Jersey’s highest uplands of sunny ridge tops, experience the scent of warm grasses and see a wealth of vegetative spring babies such as at High Point State Park. Take a walk on the Monument Trail. Its thin soil supports aromatic black birch that gave birth to birch beer, sassafras used in gumbo and tea, huckleberries (yum), spicy sweet fern and wintergreen (Gaultheria sp). Touch the softness of hair grass (Deschampsia flexuosa). Take both woody and wildflower field guides to know the plants and spend an afternoon.

Pyramid Mountain in Boonton is another immersive experience where young wildflowers abound in wetlands and in dry woodland. Observe a wetland garden of violets, wild geranium, viburnum and dogwood from a wooden bridge. Mayapples rise like parasols next to fiddleheads, spicebush’s yellow flowers (crush a leaf for a sniff), and blue violets under a natural bower of honeysuckle. And, if you’re lucky, watch a woodpecker pecking right before your eyes.

New Jersey’s diverse landscapes offer a distinct over-all view in spring. Forests appear as a light green mist, almost chartreuse, or a red (maple) or purple haze (redbud), depending on what trees are in bloom. Marshes look like grassy fields. Wetlands are just beginning to teem with life of smaller sizes. But everywhere there is bird song, wildflowers, blossoming trees, mosses to touch, the scent of spring and sun on rocky outcrops.

This story was first published: Spring, 2018