It Was A Bridge Under Cover 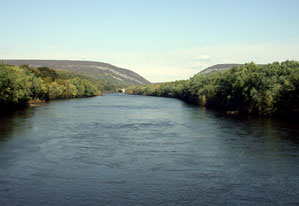 On a relaxing walk across the pedestrian bridge from Columbia, NJ to Portland, PA on a sunny day, you would not suspect that this scene of the magnificent thrusts of the water gap, and the architecturally rich arches of the Delaware Lackawanna and Western viaduct that anchors your upstream view, could be anything but tranquil.

The Columbia Bridge before the flood. Photos courtesy Neil Brodt

The footbridge, built only for human passage, and maybe an occasional animal, enables the walker to enjoy the quiet, natural surroundings without sharing the space with cars and trucks whose whirring tires across steel decking shatter the stillness. A leisurely stroll through Portland can be very rewarding for those who want to shop for antiques or gifts, look at old photos in the town barber shop, or have lunch in one of several eateries. You are struck by the fact that this town sits precariously, right on the edge of the river, and there are references- signs, post cards- to a different kind of bridge. When you look at the pier supports of the footbridge, you notice that they look much older than the bridge itself. You read a plaque as you start your walk back to Columbia, and then you know that there was an earlier bridge that rested on those same piers. And there was a cataclysm that removed forever, the last covered bridge across the Delaware River.

It was August 19th, 1955, and former Knowlton Township Mayor, Frank Van Horn was there, watching the rising, raging flood waters, the result of hurricane Diane's torrential rains, from above the river on Walnut Road with other family members. "I was only five or six, but I'll never forget the things I saw that day," says the Mayor. The gathering watched in horror as houses, animals, trees and many other objects floated by their vantage point. The covered bridge could not hold back the river, once the flow began to press against the wooden sides.

About two miles downstream from the covered bridge, a steel railroad bridge spanned the Delaware, and still does today. "Apparently, the Portland side of the bridge let go first, followed by the Columbia side," says Van Horn. "The first side got hung up at the steel bridge, then the second side joined it like a V, just like a jigsaw puzzle, and the water started to rise behind it like a dam," recalls the Mayor.

"That old dry wood couldn't take the pressure, and eventually the force drove the wooden bridge under the railroad bridge, and the wood splintered, and the dust rose up like an explosion," he recounted. "It kind of ground up the wood when it came up to the surface on the other side of the railroad bridge." Other accounts from the time suggest that the main beam from the covered bridge acted like a battering ram on other spans downstream. And so ended the covered bridge era on the Delaware.

According to the Bicentennial Celebration publication, Historical Sites of Knowlton Township, (1976) , the covered bridge was built by the Charles, Kellogg and Maurice Company, and was finished in 1869. It was a Burr truss bridge, and was 775 feet long and 18 feet wide. The plaque on the Portland side of the bridge reads, "Site of the last of 16 covered bridges that once spanned the Delaware. Erected 1831-1869. Destroyed by flood August 19, 1955."

"And as the years have come and gone
The river keeps time, just flowing on.
But could the bridge its story tell
Of how 'twas built both strong and well.
(from a poem, "The Old Covered Bridge," by Mrs. Ada Snyder Read. It appeared in the Historical Sites of Knowlton Township).

In 2019, the Historic Moravian Village of Hope celebrated 250 years since the Moravians first settled the hills along the Beaver Brook.