In the late 1800s, Myra Brookfield bequeathed her Morristown home and property, on DeHart Street, for the establishment of a local hospital. Her gift was not unconditional; she challenged the local community to raise an additional $15,000, within three years, to provide equipment and furnishings for the facility. As is the case with most "matching grants", the money did not simply appear; someone had to beat the bushes. In this case, that person was Augusta Stone, who assumed responsibility for making the urgent appeals required for residents to subscribe to the fundraising effort. With six weeks to spare, Ms. Stone reached her goal, and a certificate of incorporation for Morristown Memorial Hospital was executed in November, 1892. To ensure that community support would continue, the Women's Association of Morristown Memorial Hospital was formally established four months later, in March, 1893. Today, both Brookfield's generosity and Stone's tireless determination are memorialized: the Brookfield Society coordinates estate gift-giving, and the annual Augusta Stone Award celebrates outstanding individual volunteer service. And, through their service with the Association, generations of women have since assured world-class health care for New Jerseyans; raising money for buildings, purchasing the first ambulance, underwriting training for nurses, and funding charity care.

Morristown Memorial has thrived, and to reflect the system's expansive breadth of top-rated specialty care, its name was changed to Morristown Medical Center in May, 2011. Support from the Women's Association of Morristown Medical Center (WAMMC) remains essential, providing more than $700,000 annually for the center, income generated from a very successful thrift shop, three hospital gift stores—and fundraising, ever flourishing in creativity and scope. Since 1974, the organization's signature event has transformed fifteen of the most elegant and historic estate homes and mansions in Morris and Somerset Counties into breathtaking showhouses that have delighted thousands of visitors over the years. The month-long events, known as The Mansion in May, have raised over six million dollars in support of The Gagnon Heart Institute, Goryeb Children's Hospital, the Carol Simon Cancer Center, the Emergency Department and other departments at Morristown Medical Center. Proceeds from this year's sixteenth showcase will be directed toward the creation of an innovative Inpatient Hospice and Palliative Care Center at Morristown Medical Center. This May's mansion, a historic castle just off Madison Avenue (Rt. 24) in Convent Station, known as Glynallyn, is one of dozens of lavish (to say the least) homes built in the late nineteenth and early twentieth centuries as summer retreats for wealthy New York industrialists and business leaders along what was graciously hailed as Millionaire's Row. In 1917, George Marshall Allen (GlynAllen?) joined families with names like Vanderbilt, Twombly, Morgan, Gibbons, Dodge and Frelinghuysen, when he completed his English Tudor castle, modeled after Compton Wynyates, in Warwickshire, England, after four years of construction. Complete with 575 stained glass windows, sixteen chimney stacks, terraced gardens, a dungeon and a moat, the three-story, 32,000 square-foot mansion contains over forty rooms, abounding with architectural intricacies and surprising details around every corner. Mr. Allen died in 1941, and his widow remarried in 1946. Soon after her death in 1951, the General Drafting Company purchased Glynallyn for its corporate headquarters and remained there for nearly forty years, until 1992. For a relatively short time, the property served again as a private residence, but is currently unoccupied. Glynallyn was listed on the National Register of Historic Places in 1987.

Anne Rooke, chair of the mansion search committee (and winner of the Augusta Stone Award in 2010), started looking for a venue for this year's event in January, 2011. "Mansions come to us in a variety of ways," she explains. "Often, real estate agents bring a property to our attention, usually one that's empty or soon to be on the market. We create a great media buzz about the property and then bring 20,000 people through the front door. Sales often follow." The expert designers selected for the event return luster and shine to every square foot of what has most times become a neglected, musty old house. It is a face-lift like no other, and visitors see a gem that they would not have recognized through the clutter and shag rugs. Glynallyn satisfied Rooke's two primary requirements—two staircases to accommodate a constant flow of traffic and a roof that doesn't leak—and she began discussions last April to secure the venue. The Designer Brunch, courtesy Mansion in May.

About one hundred design firms attended a Designer Open House in October, then submitted proposals for rooms, hallways and closets in November. "Of course, most designers submit for the same popular spots, like large prime spaces on the first floor," says Cathy Bizcak, explaining the Design Committee's dilemma. "Our job is to decide which design is most suitable and workable for the house, and which designers we would like to have in our mansion. The job is quite overwhelming when you have 85 boards with fabrics, photos, drawings, paint chips, colors and descriptions spread out all over, and you have to choose one per space. Then we have to contact designers not chosen for prime spaces and see if they would be willing to transfer their design to another space or to completely start over in a new venue." By mid-December, more than sixty of the area's top interior and landscape designers had been selected to transform breathe life into Glynallyn this spring, each assigned a space in which to exhibit the fullest expression of his or her craft.

So that the home would resemble a weathered, 400-year-old castle, hand-made, uneven bricks laid in irregular lines mix with pitted, stained limestone on the building's exterior, which is embellished with turrets, battlements, crenellated parapet walls and gables. Elaborate carvings include the flourishes and badges of English royalty, gargoyles and caricatures. The traditional Tudor-style trim work was fashioned with rough timber from old ships and skids, and the slate chosen for the roof was of an irregular shape, thickness and color. Upon entering Glynallyn through medieval doors, visitors arrive in the Little Hall, and the designer space entitled "Handsome Little Devil", where furniture fabricated specifically for this showcase compliments centuries-old oak paneling that Allen acquired from Compton Wynyates. A rustic fireplace in the entry replicates one in a cottage built for William Shakespeare's wife, Anne Hathaway. The coatroom, or "Ming China Closet", is a less formal sitting room, now a mix of traditional elements with some new, fresher patterns and textures, making the space transitional and timeless. There is a 1,000 square-foot library with ceiling-high oak paneling imported from England, an ornately carved fireplace surround and a sculptured plaster ceiling copied from a room at Oxford University. A covered winter porch has become "Hidden Respite", where the hosts of the house could "get away" within their own home to enjoy views of the gardens and sit by a cozy fire. An exquisitely arched doorway and a picturesque bay window enhance the morning room. And the spacious dining room, with refreshingly lighter features, such as the beautifully detailed Georgian mantel and carved plaster ceiling, will host "An Affair at Glynallyn", set up for an intimate celebration lunch. The kitchen and butler's pantry are showcases for elegant custom cabinetry and furnishings in a space entitled "The Grand Gourmet". Adjoining, the breakfast room is "Lady Allen's Bower", a private space where she could withdraw and focus on her interests; perfect for a home office. 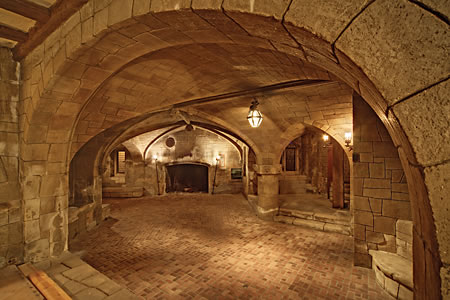 The dungeon will transform "Into Blues", a jazz club. Photo by Wing Wong.

Hidden behind one of the walls in the Great Hall is a secret circular, stone stairway that leads down to a medieval dungeon with vaulted ceilings and gothic arches. An enormous fireplace, antique lanterns and Shakespearean stage add to the gothic ambiance of the room, now transformed "Into Blues"—a jazz club—natural, fresh, and modern, with a dose of traditional and refined.

On the second floor, generously sized bedrooms, each with bathroom and fireplace, served as living quarters for the family and their guests. Mr. Allen's room is outfitted as a "Gentleman's Retreat" and Mrs. Allen's study a "Woman's Cave", exuding femininity and luxury. Guest rooms, dressing rooms, children's study, closets, laundry room and baths are all given exquisite and imaginative treatment, as are the stairway and the landing, which serves as a sixteenth century gallery suitable to the Tudor period. The fully finished attic has a six-room apartment, and a space modeled after a room at Compton Wynyates, called the Priest's Room, was used by Mr. Allen as his photography studio. The restoration, "Map Restorer's Keep" integrates the warmth and protective qualities of the environment and even makes a play on the era when one traveled the world centuries ago by ship. Landscape designer, Sean Murray, considers his project, Grace’s Lookout, a view to the surrounding gardens and woodland below.

The estate's landscape is entirely reconstituted, sometimes reinterpreted, with a sparkling array of installations. "Woodland Tranquility" fills the shaded area approaching the house; evergreen and deciduous trees and shrubs, lined with garden paths and benches. An elegant, formal area, "A Garden of Seasons for all the Senses" brings variety of pretty perennials that one can enjoy from spring right through the fall. Visitors can stop and take a few moments to relax in the "Reflection Garden", explore the "Tudor Rose Garden", the Compton Court Garden, or enjoy a woodland view from the "Lady's Garden".

At one time, the estate's meticulous landscape featured a moat and a sunken rock garden with a miniature canal and fountain. At "The Garden in the 'Glyn'", landscapers restored a garden buried beneath fallen leaves, trees and years of neglect. A cistern fountain, enclosed by the grotto walls formed by massive circular stones, spills into a long, narrow stone canal that runs towards the glen in the distance.

Can you imagine? Sixty inimitable expressions of the finest American beauty and style, at home in a venue that represents a pinnacle in American prosperity. And can you imagine the immense effort required to coordinate and produce such a show as the Mansion in May? Don't miss it!