Once the backbone of northwestern New Jersey agriculture, dairy farms have been fading for the last fifty years. Hayfields, horses and garden centers have largely replaced the cows and creameries that once dominated the landscape. Faced with drastic price fluctuations based on outdated federal milk-pricing formulas and regulations, today's remaining dairy farmers see pennies on the dollar of the consumer retail price of milk. Still, they hope for changes in federal and state laws that would allow them more freedom to sell directly to consumers, control their own milk and pricing, and continue to produce here in the Garden State. 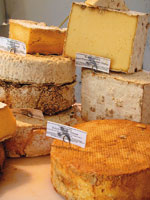 Some enterprising farmers have turned to making cheese to keep their dairies viable. Cows, along with sheep and goats, have found their way into mainstream consumption via locally made cheeses. Each dairy farmer has a different approach, a unique product and their own story to tell. Learn a bit about these artisanal cheeses and their variety of types, styles and flavors. Then visit a nearby farmers' market or plan a drive out to a farm stand to experience the taste of real, small-batch, family farm cheese.

Cheese can be made with raw milk, as long as the cheese is aged for a minimum of sixty days. Otherwise, the milk must be pasteurized to make products such as farmer-style cheese, yogurt, ricotta and spreadable cheeses. Either way, creamery facilities must pass local or state health department inspections, and requirements for water, sewer, and other infrastructure issues can make the initial investment prohibitive for many farmers. One option is to ship the milk to an existing cheese-making facility. Sal Lee Farm , a small family-run farm in Bangor, Pennsylvania, sends their mixed-breed, high butterfat content, raw cow's milk to a nearby cheese maker, where their aged Cheddar, Swiss and Jack cheeses are packaged, labeled and returned to the farm for direct retail sales.

Mondo Dairy, in Paterson, makes cheese exclusively with milk from northwestern New Jersey, combining product from several area dairies to formulate primarily ethnic yogurt and soft-style cheeses. Owner Jack Taranto prides himself on paying a stable, year-round price that justly compensates the farmers for their fluid milk. "I see that most of the dairy farms are closing down. I am trying to keep the farmers alive and get as much milk as possible from them so that they can stay in business," he says. Currently, he can sell his cheeses within New Jersey only, and cannot private label cheeses for the small dairies who provide him with the milk, until they have an inspected and approved sales and storage facility.

Other farmers have invested in on-site facilities, and learned the art and science of cheese making. Fredon dairy farmer, Pete Southway and his family use milk exclusively from their Springhouse Dairy, flowing directly from the milking parlor barn, via tubing, to the pasteurization vat in the creamery below. "The biggest key to our success and acceptance has been the farmstead freshness of the milk," Southway says of his soft, pasteurized cheeses. Cheese making is a time and labor-intensive process, and creating just the right combination of cultures, processing technique and flavorings is as much art as science. 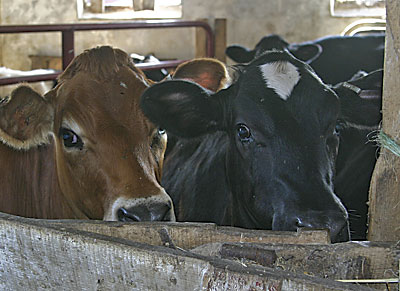 Marilyn Southway weighs and packages tomato-basil cheese in the creamery down hill from the milking parlor where Jersey and Guernsey cows do their work. Springhouse Dairy Farmstead Cheeses are flavored with a variety of herbs and dried fruits, and sold directly to consumers from an on-farm stand, at the Fairgrounds Farmers' Market in Sussex County, and at local retail outlets. 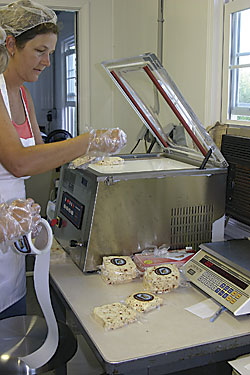 It takes 2,000 lbs of milk to make 200 lbs of cheese. Southway is particular about the milk he uses, all of which comes from his herd of pastured Jersey and Guernsey cows, rich in butterfat and protein, and yielding about twenty percent more cheese per gallon than that of Holsteins. The milk is pasteurized at 155 degrees for 30 minutes, and then cooled down. Then the culture—a specific beneficial acid-producing bacterial mix that varies according to the cheese product to be made—is added to the vat. The cheese cooks, and rennet is added, causing the milk to solidify and form curds. Rennet is traditionally derived from enzymes in a cow's stomach that help to digest the mother's milk. However, Southway uses vegetable rennet, which contains similar enzymes to produce the same result. After twenty minutes, the curds are cut with a cheese knife, into quarter inch cubes. The whey is shed, and the curds cook in the whey for several hours, until the desired consistency is achieved. The curds are salted, and the whey by-product is removed, later spread on the fields, helping to activate manure for fertilization, or used as a feed supplement. The cheese is poured into a mold and pressed into shape for ten hours, then refrigerated and allowed to set before being cut into packages for retail sale.

In Honesdale, Pennsylvania, in the upper Delaware River valley, Calkins Creamery specializes in raw milk cheeses. Cheese makers Emily and Jay Montgomery run the creamery on family farmland, while other family members care for the dairy herd. Their herd of Holsteins has been closed for forty years, allowing them to breed for increased milk fat and protein, and to formulate their own cheeses. The cows are primarily out on pasture year-round, and the changing forages affect the type of cheese being made during different seasons. Calkins produces three different types of raw milk aged cheeses: natural rind, waxed and bloomy rind, each with several varieties and flavors. They make cheese five days a week, hand-making their cheese in micro-batches of 180lbs, using only vegetable rennet. Each type requires specific care, and requires strict attention from start to finish. "We are actively scraping curd into each mold," Jay Montgomery says. Later, hand waxing or treating and scraping the rinds will occur. The distinctive flavors of natural rind cheese come from mold that must be brushed off each week during the aging process, which lasts more than six months. Bloomy rind cheese, such as Brie, is held in a special room, with a regulated microclimate to develop its specific characteristics. Waxed cheeses are semi-hard Gouda or Cheddar-type cheese, aged three to six months, hand-waxed in three layers to form a protective barrier, keeping the cheese softer in consistency.

Further south, Klein Dairy Farm and Creamery , just outside of Easton, milks Holstein-Friesian mixes for their raw milk aged cheese, raw fluid milk sales, and pasteurized yogurt, cheese spreads and mozzarella. The Klein family dairy has been in operation since the 1930s, but reinvented itself in 2004 with a raw milk permit and cheese-making license, along with an on-farm stand for sales.

Hunterdon County is the new home for established farmers and cheese makers, Jonathan and Nina White, of Bobolink Dairy. Formerly on a rented farm in Vernon, in Sussex County, the dairy has found a permanent home in Milford, between Phillipsburg and Frenchtown. The Whites raise 100% grass-fed cows, and have developed their own line, breeding traditional dairy breeds with Irish Kerry cattle, since 2003. Bobolink sells on-farm, on-line, and at farmer's markets, far and wide. The Whites also hold cheese-making classes on the farm. 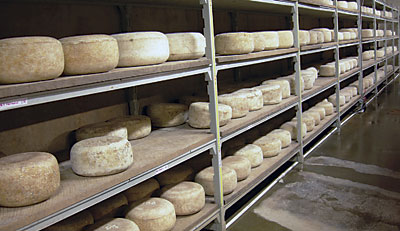 At Valley Shepherd Creamery in Long Valley, production of a Pyrenees style cave aged cheese begins with a herd of Dutch Friesian milk sheep. A model for sustainable family farming, the creamery makes cheeses based on old-world European styles, with the aid of modern equipment. Visitors have access to all farm activities, providing a unique view of daily life on a real working sheep dairy as practiced in Europe for the last 4,000 years. Photos courtesy Eran Wajswol 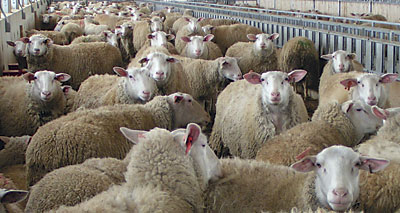 Farmer Eran Wajswol is often mentioned by local cheese-makers as inspiration and mentor. In fact, Jonathan White of Bobolink knew Wajswol when they were both students at Stevens Institute of Technology. It was there that Wajswol also met his wife, Debra, with whom he nurtured the idea for, and eventually opened, Valley Shepherd Creamery in Long Valley. Primarily a sheep dairy, the state-of-the-art facility specializes in cave-aged, old-world European style cheeses, drawn from a herd of Dutch Friesian sheep. The couple spent years traveling to Spain, France, Italy, Netherlands and Belgium to hone their craft until they were satisfied and ready to release their product to the public. Valley Shepherd is an impressive operation; an educational, agri-tourism farm, where visitors and school groups can tour the milking parlor, aging rooms and participate in tastings and special events, such as the sheep shearing festival. Cheese making classes are held many times each year, but sell out quickly. The on-farm store, online store, farmers' markets and select retail stores carry Valley Shepherd cheeses. Certain products are only available directly off the farm, and many are seasonal, depending upon specific milk characteristics that can vary based on forage and natural seasonal milk changes in the herd. 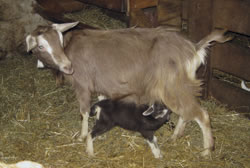 A quick ride out Route 78, to the Lehigh Valley south of Bethlehem, PA, gets you to the Flint Hill Farm Educational Center , where cheese-making classes are part of the farm's non-profit community outreach services. They milk goats, a Toggenberg/Alpine mixed breed, as well as Jersey cows, making both raw aged cheeses as well as pasteurized soft goat Chevre and cow cheese, cow and goat yogurt and smoothies. They even make butter, have a raw milk license for goat and cow milk, and also pasteurize both for fluid sales. Flint Hill sells their cheeses at farmers' markets on both sides of the Delaware River, as well as on-line.

There's more goat milk cheese at Patches of Star Dairy, on fourteen acres near Nazareth, Pennsylvania. Owner Elly Hoshour, who has bred goats for 25 years, and made cheese for 10, maintains a herd of 100 female Saanens. The goats are raised on alfalfa orchard grass pastures and locally grown grains, producing a butterfat perfect for cheese. Sunflower seeds added to their diet increase the milk's butterfat, and poison ivy and dandelions are goat favorites. But goat milk's characteristic flavor seems to be animal-specific, not influenced so much by their feed, as cows' milk tends to be. Hoshour makes both pasteurized, soft cheeses as well as raw milk aged cheeses of the Colby and Cheddar variety. Her Chevre is a popular item, and not typically made by other dairies. Hoshour sells her cheeses at markets in New York City and Philadelphia, and plans on opening an on-farm store in the near future. "Each cheese maker has a unique quality. Each one of us does that in our own way. We are proud of what we produce."

Local cheese makes the connection from farm to table traceable and meaningful. The food bears far less road mileage along a shortened supply and distribution chain. And more of each dollar returns directly to the farmer's pocket, keeping local farms viable and providing vistas and open space in our communities. With so many types of cheese to choose from, food lovers have yet another reason to buy local. Taste isn't the only reason to try these, but it certainly is motivation to explore the farmstead cheeses, made right here at home.