Out On A Limb

New Jersey has long been home to orchards. Much of the terrain in the northwestern section tends to be rocky and hilly, suited more for planting fruit trees than for field crop production. Although most of us think first of apples when we think of tree fruit, New Jersey is the fourth largest peach producing state in the nation. Apple trees do outnumber peach trees in northwestern New Jersey, but local apple growers just can't compete with the volume produced in states such as New York or Washington. By late summer, when apples, peaches and pears ripen, local orchards have already produced a full season's worth of other tree fruits and can keep our refrigerators stocked with fresh pickings from June through November. Sweet and sour cherries, plums, nectarines and peaches round out the just-past summer offerings, so plan ahead for next season's picks.

The orchards here come in all shapes and sizes, from small dedicated groves, with a dozen acres in production, to larger 100-plus acre farms with vegetables, livestock or grains in addition to tree fruit. No matter what type of orchard a grower cultivates, many of the issues and concerns related to producing a viable tree fruit crop and bringing it to market are similar. Growers large and small, running diverse farms or concentrating on a crop or two, all confront the same challenges.

Good help is hard to find in any business, and the task of growing healthy trees requires constant attention, groomed with years of experience. "Labor is difficult," says Meredith Compton, of Peaceful Valley Orchards in Pittstown. "Especially with the pruning of the trees. It's hard to teach someone the proper way of doing things. He (her husband, Jeremy), does all of the pruning of the trees himself." Bob Best, Jr., of Best's Fruit Farm in Hackettstown, also prunes 99% of the crop himself. "I can't have a crew to prune the trees properly. It's a very difficult job," he says. Farmer Pete Bast and wife Rena recently began running Beemerville Orchards, a smaller Sussex County orchard with 12 acres of fruit trees tucked into a quiet hillside. The orchard was established by Rena's parents, and Bast learned the proper pruning techniques from his father-in-law. Jim Hunt has owned his orchards at Windy Brow Farms in Newton for seven years brings in a pruning crew every other year or so, But it is the hands-on attention that he and Orchard Manager Mike Decker bring to the job which helps to keep the trees productive. 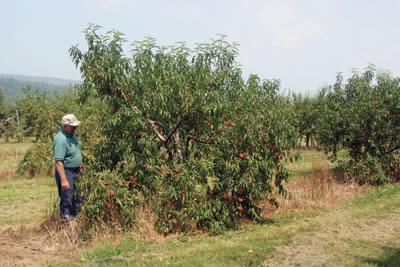 Dave Flitcroft tends to peaches at Brook Hollow Farm in Knowlton Township. After earning a degree in horticulture at University of Massachusetts, Flitcroft was the Passaic County Ag Agent, then ran a nursery for 25 years. He bought and converted Brook Hollow Farm to apple and peach orchards 25 years ago. These trees yield about four bushels of yellow and white peaches from three to four pickings each season. “I’m still learning after all these years,” says Flitcroft. “Whoever gets into this business is going to make some major mistakes.”

Proper pruning and thinning of apple trees determines the quantity and quality of the crop. "Apples are naturally biennial," says Debbie Post, who manages about 3,000 trees on her 60-year-old orchards at Riamede Farm Riamede in Chester. "When there is too much fruit on the trees, the apple trees don't have the energy to make next year's buds. When there are only a few apples on the trees, the trees make too many next year buds. It's a vicious cycle, and the apple farmer's job is to trick the tree into producing annually- an art not a science. People like Bob Best who have been doing this a lifetime, have a second sense about thinning."

Government regulations are another concern of many of the farmers. The Best's run a cider mill, and because the cider is marketed and sold in a different location than where it is made, it has to be pasteurized. The equipment investment, on top of the time and effort necessary to file the ongoing reports, is immense, Best says. He views some of these regulations as unreasonable and burdensome to farmers, and says that they are many times redundant. Simplification and streamlining of the paperwork would make more sense, and farmers could more spend time actually farming. Even though farmers could reach new markets with a pasteurized cider, upfront costs and ongoing government requirements make it difficult.

Another main concern is crop damage caused by wildlife. Peaceful Valley Orchards recently obtained deer fencing for 30 acres of a new tree fruit orchard. At Beemerville Orchards, deer and bear have been enjoying some of the crop, as well as raccoon, groundhogs and squirrels. By far, the most destruction is caused by the deer. "When you loose 50% of the crop, it hurts," Best said, referring to the extensive damage browsing deer have caused to his sweet corn crop.

Bear damage has been a visible public issue, as the debate over whether New Jersey should offer a bear hunting season is in the news each year. At Best's, the bears have been so content eating the fruit right off of the trees that the trap set by the Division of Fish and Wildlife could not lure them from the orchard! "It's only a matter of time before it becomes a major problem," Best says. Pete Bast agrees, stating that, while the bear damage has been confined to the loss of a small portion of the early peach crop so far this season, there has been an increase in the amount of bears. He believes that the trees will soon be subjected to damage that will become significant within the next 5-6 years.

Farmers can obtain distress permits, allowing them to shoot wildlife in certain circumstances where their crops are threatened. But some farmers are unable to secure hunting permits because of their proximity to residential development. Because of the surrounding development, Best is unable to secure a permit to shoot the deer that ultimately destroyed 75% of the sweet corn in one of his fields,.

Tree fruit in New Jersey is a difficult crop to grow due to the "high insect and disease pressure" found in the northeast, Merideth Compton says. Having worked for eight years as an Integrated Pest Management Associate with Rutgers University, she should know. "It's nearly impossible to have organic tree fruit production on the northeast coast. Some farmers around here have organic trees, but their production is extremely low because there is so much loss. There simply aren't effective organic chemicals to handle certain insects and diseases."

Local farmers now predominantly use Integrated Pest Management practices, or IPM, to monitor the crop for insect issues, and to recognize when to take action, what specific chemical control to use, and how to use it effectively at lower levels. The chemicals used in today's tree fruit production are more specific, and the standard is to spray only what is necessary to prevent problems. Farmers aren't likely to overuse these products anyway, because they don't come cheap! Appropriate application, to ensure a quality, productive crop, is the norm. "We are both licensed pesticide applicators," Compton says of herself and her husband. "You can't leave that up to someone else." 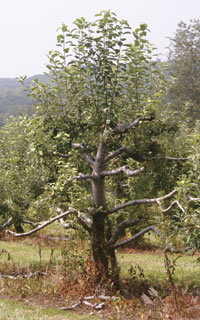 A tree scorched by fire blight.

No matter what the farmer's chemical arsenal, disease is insidious, and vigilance is the number one weapon. Early this season, Dave Flitcroft's well-trained eye noticed tell-tale oozing patches and wilting blossoms on some of his apple trees at Brook Hollow Farm in Knowlton Township. Fire blight! The disease, which occurs sporadically in Northwest New Jersey's apple and peach orchards, can cause extensive tree damage when it rears it's nasty little head. A highly contagious bacteria that infects a tree's vascular system — spread by insects, wind and rain — the blight has been known for 200 years. Yet, fire blight has no known cure, and no perceptible pattern to its onset. Infections are controlled by amputation; removal of damaged limbs to save the tree. Since the first signs, Flitcroft has gone through the entire orchard, visually inspecting each limb, pruning when necessary and using antibiotic sprays to control recurrence.

Brook Hollow and dozens of other local orchards survived this year's epidemic only after countless hours of toil. After pruning sick sucker shoots with Clorox dipped tools, they should be burned immediately. Yet the Forest Fire Service wants farmers to file applications, get certifications from "experts", get lab reports, pay permit fees, and wait weeks and weeks for special infested plant life burn permits. By the time the burn permit arrives, the bacteria has spread on the breezes to the next county!

And the weather? Even a relatively farmer-friendly summer like the one just passed can throw a few curve balls. A hot spell in mid August cost Dave Flitcroft 30% of his premium peaches, bruising them and wrinkling their skin. In order to keep enough produce for his on-farm retail customers, Flitcroft was unable to serve his normal commercial outlets. And the Snyder Research Farm in Pittstown got hit with serious hail in late August, wiping out a year's worth of State research. 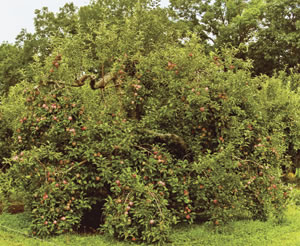 Riamede Orchards in Chester are a mix of old and new apple trees. The orchards originally planted in the 1930s are large, old fashioned apple trees, the kind we envision Johnny Appleseed having sewn.

After planting, nursing, grooming, medicating and dodging bullets all summer, farmers still need to market their produce. A few do some specialty wholesaling to major grocery stores, but it is impossible to compete with large out-of state growers on high volume prices. Most local orchards retail the majority of the crop directly to the consumer: at farmers markets throughout the region, at farm and at their own on-site markets and stores. Thousands of families visit orchards to pick their own fruit. And orchards have become popular destinations for school groups.

One thing is for sure: nothing is wasted. Windy Brow utilizes all blemished fruit in their "from scratch" on-site bakery, selling about 200 pies each weekend during apple picking season and countless apple cider donuts, one of their signature baked goods. At Ochs Orchard in Warwick, just above the Sussex County line in Warwick, NY, they make 700 – 2000 gallons of cider every Thursday in an on-site operation that resembles a small factory. At Pochuck Valley Farms Pochuck Valley Farms in Vernon they make cider a few days a week, crushing ground-up apple "pumice" on a wooden press. It takes a bushel of apples to make three and a half gallons. Each brew is a mix of varieties and ratios: Red Delicious for sweetness, Winesap for tang, McIntosh and Empire for body.

With all these trials and tribulations, why do you think these farmers go to all the trouble? Take a walk through a Skylands orchard and see for yourself!

Pick Your Own Farms

Pick your own apples and pumpkins at our 250 year old farm. Simple, authentic and without the carnival. Thirty varieties of apples, traditional, heirloom and your modern favorites. Free hay rides on weekends through the scenic old orchards out to the pumpkin patch. Cider, donuts, jams, local honey & more. School harvest trips.